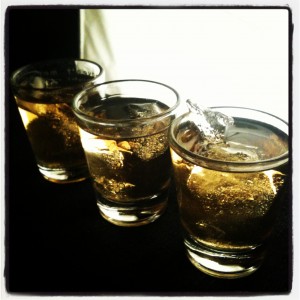 We start with a bang, or more rightly a shot, a shot of bourbon. Mix drinking with cooking and a need to be the internet’s cutest couple and we really peel back the layers and let you behind the scenes in our everyday relationship. And it gets ugly.

Perhaps we should have followed along with a recipe from at least one episode of either show we covered and brought some food with us to recording. But instead, we hungrily review two shows about cooking.

First up, a Limited Release Exclusive! Thanks to Sandy Nicholson, writer and creator of Comfort Food, for giving us access to all 6 episodes of the series before release. A very cute show about a couple who recently moved apart from each other trying to keep their relationship going by making desserts together over the phone.

Because Nick and I are strictly forbidden from cooking together it really drew us both in. And once you’ve watched all the episodes, particularly episode 5, you may ask me more about which character I took issue with, but for now we remain frustratingly spoiler free.

And regarding the gender of creator Sandy, I tried very hard to play the pronoun game since it’s a somewhat gender-less name. Interestingly the only two people I know named Sandy are both men. But in Nick’s defense, it is far more likely in North America for Sandy to be a woman’s name, so he went with it.

Listen closely around the 20 minute mark and place your bets on whether we can hold it together for 8 more minutes while we review Pairings.

Pairings is food pornography at it’s best, money shots with a story so it appeals to everyone! Do not watch this show hungry, or with an empty pantry. You will definitely want to cook after one episode, especially if you are a single man.

We’re not sure why this one took so long for us to review since it’s littered with some of our favourite creators, artists and actors from the LA scene, but we love it now, and we want to see Season Two so consider donating!

Did you place your bets? Did we hold it together? I don’t think I did.

So why don’t you get in touch with us via the Twitters, the Facebooks  or the Google+s and let us know if you like the shows, if you like us, or if you have your own show you want us to review. We also accept email at backtalk@limitedreleasepodcast.ca, and reviews on iTunes.