Tomorrow is the next stage in a large journey.

It was March 2011 and I was at a convention in Toronto pimping the webseries both me and Nick worked on, Mind’s Eye, as well as scoping out the dealer’s room for goodies, and talking about our podcast to whoever wanted to hear about it. It was a memorable weekend for so many reasons, but one was seeing a small camera crew and a reporter working the floor interviewing the stars. By the end of the weekend we had bumped into each other enough times to ask each other what we were all about.

Mike Fly, producer and co-director of the vlog series Sexy Nerd Girl, chatted with me about the concept of creating a first person narrative and transmedia project with the created character of Valerie Lapomme and how they were laying the groundwork of the character so they could create a third person narrative story in the future. It immediately sounded like the best idea ever to me.

Two years and 167 vlogs later we are on the cusp of Versus Valerie! The first episode will be released tomorrow. 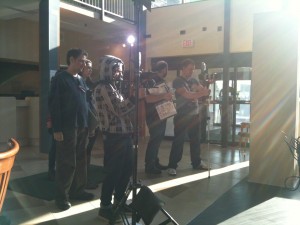 A lot of people have gone into the making of Valerie Lapomme, Sexy Nerd Girl and Versus Valerie over the last few years. Including our own co-host extraordinaire, Nick. Which is why I’m going to need a co-host when it comes time to review this one. The line starts right here…