Skip to content
HomeEpisodesEpisode the Forty Seventh: Dick Punch, Mythos and No Nick :-(

Welcome to our second episode ever without Nick as a co-host. But not to worry, we’ve got someone in his seat!

First up, IAWTV awards nominees were announced. You can look through the complete list here, but be warned, there’s lots of clicking. Congrats to Out With Dad, Husbands, Guidestones, Video Game High School, Pretty the Series and the many other series we haven’t covered yet, on their nominations!

And on to the shows! As usual I let my co-hosts choose the shows to watch. And boys will be boys, so we are watching Dick Punch. When I let Nick know this was the show Matt chose for us to watch his reaction was unexpected to me, “I really want to watch that!”. Matt sheds some light on why guys are immediately attracted to a show called Dick Punch. 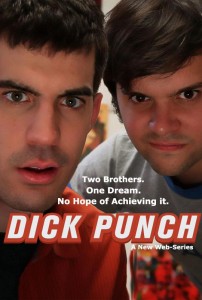 And, in a stark turn, we then move on to the slow moving, deity laden, mystery Mythos. The tone and pacing of the series is quite intriguing, however the mystery doesn’t grab us, but for very different reasons. The final episode of this show will be airing next week, so with a complete season released maybe the show will deliver more answers.

There’s much to enjoy in this series, despite some flaws. Make sure to check in on December 13th once the entire series is available.

Thanks again to Matt Corradetti for standing in while Nick is away. You can subscribe to his podcast Living Insights on iTunes and hear some great tips on living a healthier lifestyle.

Thanks as well to Soch for his constant and amazing work making both Limited Release, and Living Insights sound like some of the best produced podcasts available for free online!